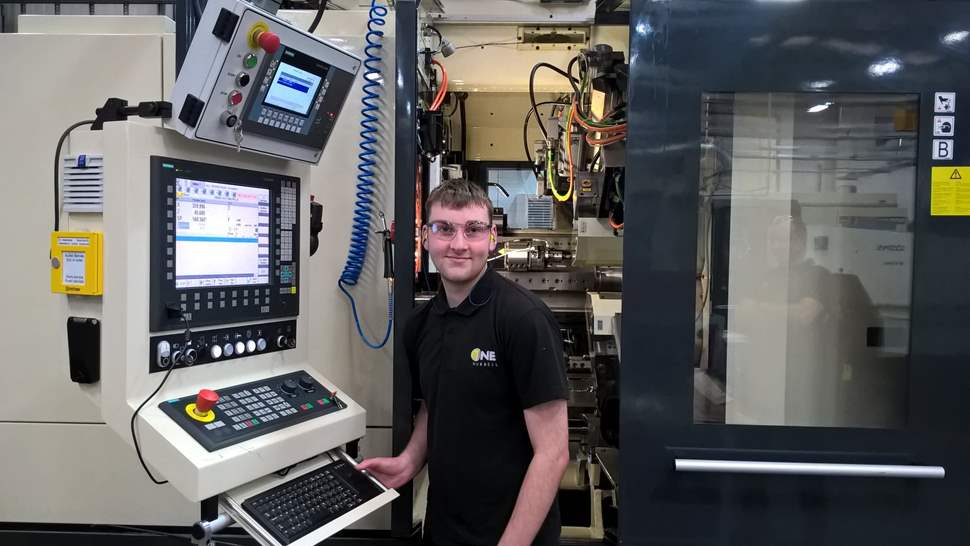 Henry Chilton has just completed the first year of his advanced apprenticeship in CNC machining at Hawke International in Ashton-under-Lyne.

His progress in the first year has impressed his employers so much that they have selected him to train on one of the company’s most advanced machine tools, which can produce a component in 35 seconds which would previously take 5 minutes.

Henry left Glossopdale Community College with 7 GCSE’s at A* - C, but more importantly, he had been given the opportunity to study for a BTEC level 2 first award in engineering, which led him to believe that engineering might be the career for him. Henry attended an open evening at Tameside College by The Growth Company, and decided to apply for their 20 week pre-apprenticeship study program. Henry joined the program, and towards the end, his CV was circulated to some of the employers who work with The Growth Company. Henry attended an interview at Hawke International, after which he was offered an apprenticeship.

Hawke International have been producing cable glands and enclosures for use in harsh and hazardous environments such as offshore platforms since 1957, and have remained leaders in the development of these products ever since, marketing their products through a global network of distributors, meeting the most stringent safety requirements. To maintain their competitive edge, Hawke have always invested in the very latest and best equipment, and this is illustrated nowhere better than in the Mori-Say TNZ842 8-spindle CNC lathes. There are only three of these machines in the UK, and Hawke International are the proud owners of two of them, the second being installed and commissioned in early 2018.

Henry was surprised when he was asked to train up on the new machine. He said: “When we were asked who would like to receive the training, not as many hands went up as I expected. I saw it as a great opportunity and was very pleased when my manager, Rick Naylor, offered me the chance."

Henry is currently being mentored by one of Hawke’s senior engineers, Karl Winterbottom. Karl commented: “Henry has a great attitude, and sees every day as an opportunity to learn something new. He asks all the right questions, and retains everything he learns. A lot of young people are criticised for not being able to do this, but we believe that Henry will develop into a real expert on this new technology, and we are excited to see how his future at Hawke unfolds."

Henry’s manager, Rick Naylor, commented: "Here at Hawke International, we have been offering apprenticeships to young people for many years, and our workforce has many former apprentices who have remained at the company on completion of their training. We have a great relationship with The Growth Company, and they have recently helped us to recruit a further two apprentices."