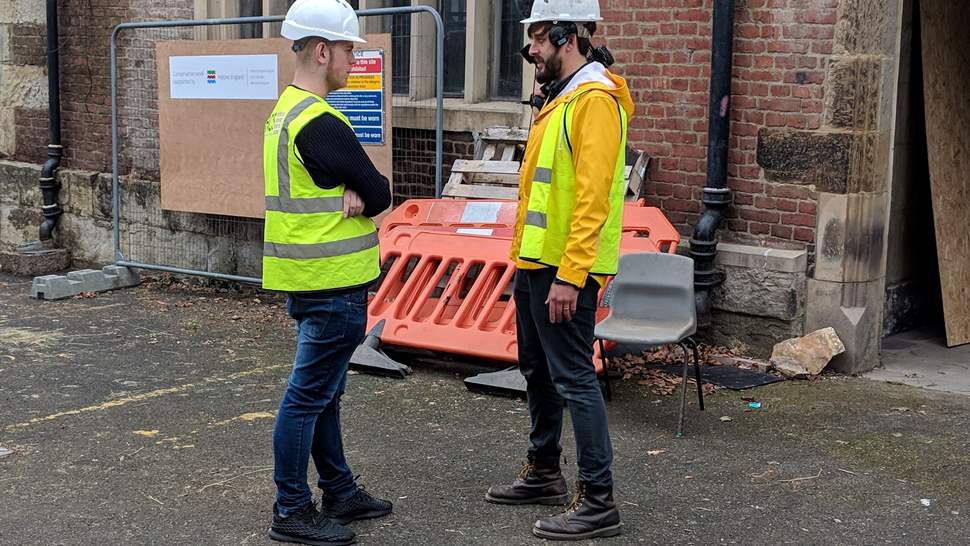 Set in woodland between Middleton and Rochdale, Hopwood Hall fell into disrepair after being left empty and damaged by vandals.

However, work is now underway to restore the estate back to its former glory. American actor and screenwriter, Hopwood DePree, found that the hall belonged to his great, great grandfather – so decided to relocate from Hollywood to Rochdale to work on the restoration full-time and do his bit to save a piece of history.

Given the scale of the work that needs to be done, Hopwood is enlisting the help of local volunteers to get the project off the ground.

Chris Cox, one of our learners at our Rochdale training centre, was approached and invited to have a tour of the hall in the hope that he would be inspired to give up some of his time and get involved. He was even lucky enough to have his visit filmed for a feature on BBC’s The One Show.

Chris had never heard of Hopwood Hall before despite living in Rochdale, and he was initially very nonchalant about his visit. However, he was soon overwhelmed by the beauty of the building, and was keen to get stuck in and help out.

Speaking of his visit, Chris said: “I am excited – I didn’t think I would be but I can see myself getting really into this. I can picture what I would do with the rooms in my head. I could do painting and decorating, bricklaying and plumbing and anything else that’s needed. If I can do it, I’ll help! It would be a really good thing to get involved with, and I would encourage other young people my age to get involved, too.”

And it looks like Chris won’t be the only young person volunteering for the project, as Hopwood is keen to get more learners on board. He said: “We’re very interested in involving students and apprentices – anyone who is aspiring to do other things in their lives or maybe has a skillset that they’re just starting out to learn or have a few years’ experience in. The restoration is going to take years to complete and we need a lot of people with passion, creativity and excitement for a project like this.”

Do you share Chris’ enthusiasm for the project? Maybe you’re an apprentice with useful skills to offer? If you’d like to get involved, get in touch with our team.