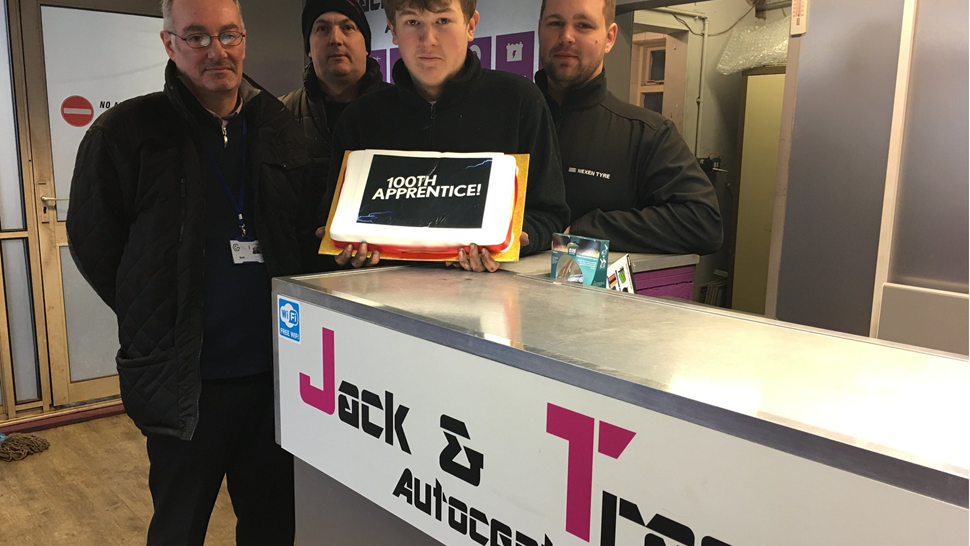 As part of a drive by Wigan Council to get more young people onto apprenticeships, we are delighted that Leyton Holt has started a 3-year apprenticeship with Jack and Track Autocentre.

Leyton started at the Growth Company on a Study Programme after leaving school, where he was working towards his maths and English. Leyton met with Amy Mansour, Placement Consultant at the Growth Company to discuss work experience. Leyton told Amy that he had a keen interest in cars, and that he had thought about pursuing mechanics but didn’t think he had the required qualifications. To help give Leyton a stepping stone to his dream career, we decided to find him work experience in a garage with the aim of him then progressing onto an apprenticeship.

Amy contacted Jack and Track Autocentre in Atherton. The business had recently been started up, and its owner had been toying with the idea of taking on an apprentice. Leyton attended an interview on-site and was asked to start his work experience the following week.

Leyton really hit the ground running and started off with the basics – completing a range of tasks such as changing tyres and checking brake pads. As time went on, he was learning more and being given more responsibilities. His levels of fitness improved, and he was feeling the benefits of being back in a routine. Amy said: “There is now a noticeable difference in his level of confidence, which is lovely to see.”

Gordon from Jack and Track Autocentre said they would like to look into how the apprenticeship scheme works and asked Amy to arrange for a member of the Apprenticeship Team to visit them. Terry Boyle arranged a meeting at the garage to explain the sign-up process and the grants involved. Gordon was happy with the process and decided to progress, offering Leyton an apprenticeship. The Growth Company supported Jack and Track Autocentre with the grant application which Wigan Council approved.

Speaking of his new role, Leyton said: “I find working with cars really interesting and prefer getting hands-on and learning on-the-job. In the future, I’d like to have my own garage and work for myself - that would be really good.”

Ryan Kennedy, Director of Jack and Track Autocentre said: “It was important to us to support a young person as opposed to bringing in a qualified mechanic. As a new business, we wanted to train someone up to grow and develop with us over time. Leyton has shown a great work ethic so far and we look forward to supporting him throughout the apprenticeship.”

The AYP scheme is open to all young people aged between 16 and 24 residing in the borough, but it has also been designed to enable those with disabilities or learning difficulties, care leavers and young people not in education, employment or training to progress through an apprenticeship.

The council has also supported the Greater Manchester campaign, #SeeDifferent, which enabled the local authority to spend an additional £120,000 on apprenticeship opportunities for people of all ages.

And, thanks to both pots of money, more than 100 apprentices have been supported into work in the last year.